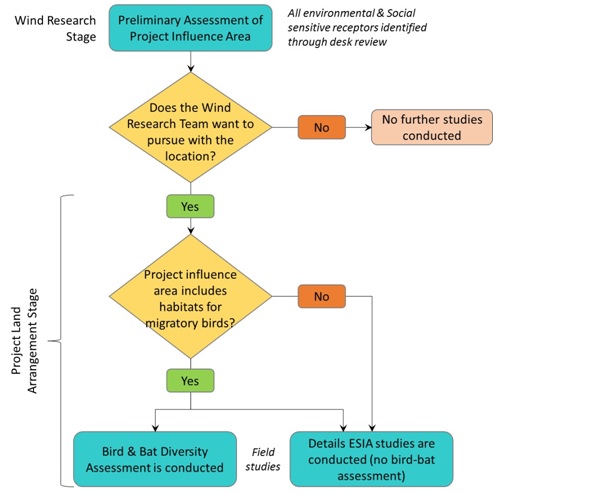 Wind energy projects neither release emissions into the air causing air pollution, nor consume large quantities of water and release effluents. Hence, they are largely considered benign of environmental impacts. However, various studies show that if wind energy facilities are located in biodiversity rich areas, especially avian, there can be large scale adverse impacts during operation and maintenance phase.

In India, the Environmental Impact Assessment (EIA) Notification of 2006 determines type of projects requiring Environmental Clearance from the Central/State authorities, which mandates conduct of EIA studies. Wind Energy projects are excluded from the Notification and hence are not required to carry out EIA study.

A re-categorization of industrial sectors was undertaken by the Central Pollution Control Board (CPCB) in 2016. The category ‘white’ was introduced during the re-classification which includes industrial sectors that are practically non-polluting. Wind power projects of all capacities have been classified as ‘white’ category. Thus, the need for obtaining a ‘Consent to Establish’ and ‘Consent to Operate’ under The Water (Prevention and Control of Pollution) Act, 1974; and The Air (Prevention and Control of Pollution) Act, 1981 from State Pollution Control Board (SPCB); and Environmental Clearance under Environmental Impact Assessment Notification 2006 has been eliminated. A ‘Letter of Intimation’ to the State Pollution Control Boardis the only requirement to be fulfilled.

Where the wind energy projects or their transmission lines pass through reserved forests, Forest Clearance from the State Forest Department has to be obtained for the project. Where the project does not interact with any type of forests, practically no environmental permits/ approvals are required for wind energy projects. However, should any endangered species be found dead near the project area, the State Forests Department comes into action, although no approvals applicable to the project.

Identification of Important Bird Areas as part of the preliminary assessment is thus critical to project development as not all of these are part of notified forests.

Way back in 2015, EMC was contacted by one of the world’s largest manufacturers of wind turbines to conduct Environmental & Social Due Diligence and Environmental & Social Impact Assessment studies for their potential wind farms in India. Our association started with conducting an Environmental & Social Due Diligence of a wind farm in Madhya Pradesh that was at land purchase stage. As part of this due diligence we reviewed their wind turbine installation process at another wind farm location in the same region, assessed their environmental, health and safety management systems that is deployed across their projects during construction and installation. During this process we found that Environmental and Social Impact Assessment studies were being conducted to meet investor requirements once the project and turbine locations were finalized.

This study also included biodiversity surveys that populated a list of all endemic and migratory bird species if any found in the project influence area. Hence, we started discussing with the Client whether there was a need for conducting biodiversity survey, as it adds to the project cost. The value add of the Environmental and Social Impact Assessment studies besides meeting investor requirements was also discussed. What action will the company take if they identified that the project influence area houses important bird areas during the study? Will the company be in a position to change the turbine locations? The Environment Department of the Company said that they received details about the project only once projects specifics were finalized and land was arranged.

This discussion resulted in a meeting with the Head of the Wind Research Department, to whom we explained that identification of environmental and social sensitivities of a potential wind energy project needs to be identified at the wind research stage itself. The Head of the Wind Research Department was convinced with the discussion and the Environment Department found a position for themselves at planning stage of the project. Thus, Environmental and Social Impact Assessment studies was used for its true purpose as a decision-making tool. A similar approach was advocated to another European wind turbine manufacturer with operations in India who agreed with our proposition.

We have been working with these two OEMs of wind turbines using the approach presented in Figure 1. In applying this methodology, we use tools like the Geographical Information System (GIS) and advanced models for shadow flicker and noise modelling. We also developed formats for capturing and interpreting the bird-bat surveys. I was happy that I could build a strong team at EMC with interdisciplinary expertise.

Write to us at emcblogs@emcentre.com if you are interested to know more about this project. Let us know if we can be of any help to you.